The NBA’s trade season is officially over, and with that comes a renewed sense of optimism surrounding the Toronto Raptors. After a hot start to the season, a brutal stretch beginning in January has the team closer to the middle of the pack than the front in the Eastern Conference playoff race. During this time, it had become increasingly clear from the team’s play that something had gone stale – a concerning turn of events for a group that not long ago sat within striking distance of the Cleveland Cavaliers. For a franchise that has enjoyed its greatest prolonged stretch of success in recent years, the sense of concern among fans and players alike was palpable heading into All-Star Weekend.

With these struggles in mind, Masai Ujiri and his Blackberry Passport tapped into the trade market and came away with some goodies. With last week’s trade for Serge Ibaka, and this afternoon’s buzzer-beating addition of P.J. Tucker, the Raptors front office came away with an enviable haul at a reasonable cost. Let’s take a look at the changes, and how they’ll theoretically affect the remainder of the season.

END_OF_DOCUMENT_TOKEN_TO_BE_REPLACED 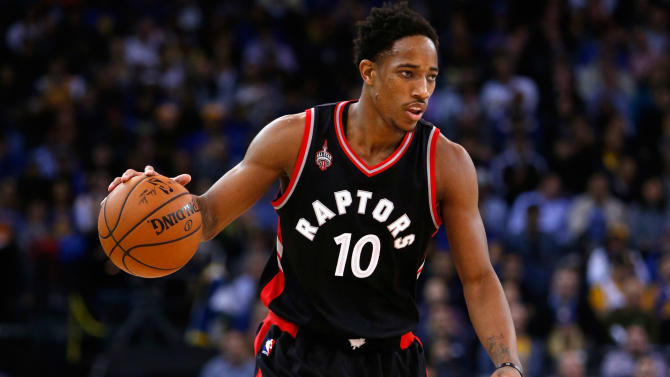 First things first: DeMar DeRozan is a good professional basketball player. A very good professional basketball player, even, as evidenced by his 23.5 points per game during the regular season, to go along with two NBA All-Star Game appearances. He is one of the faces of the Toronto Raptors franchise, the team’s all-time leading playoff scorer, and has been a part of the most successful regular seasons in franchise history.

Put that all together, and you have a legitimate NBA player. Furthermore, DeRozan has embraced both the city of Toronto, and the work it takes to improve as a basketball player at the professional level, getting better in each of his 7 seasons in the league. An athlete with that kind of drive and that kind of love for his adopted city is the stuff Toronto sports legends are made of.

So why is DeMar DeRozan such a source of grief for Raptors fans? END_OF_DOCUMENT_TOKEN_TO_BE_REPLACED

Last night, in a not-entirely unexpected piece of NBA news, Sam Hinkie stepped down as General Manager of the Philadelphia 76ers. Three years into an unprecedented rebuilding effort, and with a 47-195 record since 2013-14 to show for it, the Sixers organization slowly phased Hinkie out: first hiring USA Basketball legend Jerry Colangelo to oversee operations, and now with the rumoured hiring of Colangelo’s son, Bryan, as the team’s new GM.

Hinkie’s strategy drew its fair share of fans and detractors alike over the years. Closer to home, Canadian Collective’s own Tyson Lavigne was, and presumably still is, a supporter of the #TrustTheProcess movement. What’s more, I wrote a paper debating the moral dilemma of Hinkie’s methods during my final undergrad year of university. With the man behind one of the NBA’s most radical experiments stepping down, I thought now would be an appropriate time to share this paper. Written almost exactly one year ago, this piece gets into the nitty-gritty of what tanking means to NBA teams, and may give some clarity into what has transpired in Philadelphia over the past three seasons. So grab your finest sweater (preferably with elbow patches), throw on your reading glasses, and pour a glass of scotch if you’d like, because it’s time to get academic, NBA-style. END_OF_DOCUMENT_TOKEN_TO_BE_REPLACED

The emergence of the Toronto Raptors as an NBA power has created a new generation of basketball fans throughout the country. And the noticable improvements to the team’s culture should keep the fan base growing for the near future.

With a 40-19 record the Toronto Raptors have again been able to find success during the 2015-2016 season. The team currently holds the 2nd seed in the Eastern Conference, with a comfortable 4.5 game lead over the 3rd place Boston Celtics. They are certainly the biggest threat to overthrow the Cleveland Cavaliers for the Eastern Conference title. And while it was assumed that the team would perform well this season, they’ve managed to exceed nearly everyone’s expectations. END_OF_DOCUMENT_TOKEN_TO_BE_REPLACED

There are few things greater in this world than sport at its purest. Sport is something capable of transcending boundaries, showcasing some of the world’s most talented people, and providing joy and wonder to those lucky enough to bear witness. From the Edmonton Grads, to the Miracle on Ice, to Usain Bolt’s record-breaking sprints, sport has long played a significant role in developing the identities of nations, and continues to influence how we look back on history. For these reasons, it is not uncommon for a person to eat, sleep, and breathe sports.

To those of you who live this life, just know that you are appreciated, and that you aren’t alone.

Sadly, there are also times when sport becomes unbearable. This is when we need to stay strong, hold our heads high, and avoid losing sight of what’s good in this world. Included in this realm of garbage is the NBA Celebrity All-Star Game, which is consistently the least entertaining event on the league’s calendar.

With the event being held tonight in Toronto, though, I felt it was my patriotic duty to keep you, the reader, informed. Often, people who can only be loosely described as “celebrities” take part in this event – thus, I took it upon myself to list the qualifications of each of this year’s participants. And so, I present this not-at-all serious scouting report for the 2016 NBA Celebrity All-Star Game. END_OF_DOCUMENT_TOKEN_TO_BE_REPLACED

The 2016 NBA All-Star Game, to be held in Toronto for the first time ever, is just over two weeks away. Fan voting to determine the starters was fairly predictable: Kobe Bryant ran away with the vote leading up to his final All-Star appearance, LeBron leads the way in the East, and even Kyle Lowry’s late surge into a starting spot seemed inevitable thanks to the power of social media.

END_OF_DOCUMENT_TOKEN_TO_BE_REPLACED

Since the outset of the NBA season, one date in particular has been circled on the calendars of basketball fans. More than halfway through the league’s regular season schedule, we’ve finally made it. January 25, 2016.